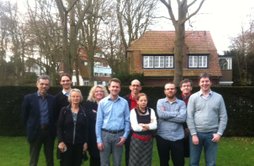 The interface of grammar, lexicon and discourse

The study of grammaticalization has been one of the primary foci in historical linguistics since the early 1990s and continues to expand, a recent offshoot being the alignment of grammaticalization studies and construction grammar. My own research in this area is both theoretical and empirical. In my theoretical research I focus on which version of construction grammar is best fitted for historical purposes, and how this can be modeled into a framework that can account for all types of change in both grammar and lexicon. My primary data are drawn from Scandinavian languages, English and Dutch, and put in a cross-linguistic perspective. At present, I am working on the following collaborative projects:

financed by The Netherlands Organization of Scientific Research (NWO)

In 2007-2008 I received a teaching replacement grant to write a  monograph on degrammaticalization, published by Oxford University Press in 2009. Here’s the blurb:

2002-2006: Is zero the final stage in grammaticalization? Some surprising effects of deflexion in Continental Scandinavian

The main aim of thisproject was to present a detailed description of the gradual decline of the Continental Scandinavian case system, based on an extensive database of relevant constructions. These fundamental changes were approached from three different angles. First of all, the project adressed the crucial question of whether loss really is the inevitable fate of inflexional material, as predicted by the so-called unidirectionality hypothesis in grammaticalization theory. I found that loss is inevitable eventually, but that there existed an intermediary stage (which has been little studied so far) during which inflexional case marking was reinforced. Secondly, I found  that the form of the noun and its modifi­ers is not only determined by syntactic rules of government, but by the inflexional classes they belong to as well. Thirdly, the inflection of native words were contrasted with the inflection of and loan-words.

1998-2002: Grammaticalization in its final stages: deflexion and related changes in continental Scandinavian

This project aimed at refining earlier accounts of deflexion in Swedish, and to to provide a coherent analysis of the loss of oblique case inflections and the increasing use of prepositional constructions as a case study in grammaticalization patterns. The primary research questions were the following:

1: How did the decline of case inflections proceed in space and time?

2: Which endings were retained and what function did they acquire? Are these changes in accordance with theoretical claims about the final stages of grammaticalization?

3: What prepositional constructions were used to encode grammatical relations formerly expressed by the oblique cases genitive, dative and accusative? How was the grammaticalization of new prepositions achieved?

4: What is the chronological relation between the loss of oblique cases and the rise of periphrastic prepositional constructions? Does the increasing use of prepositions precede or follow the decline of inflectional case or did both processes occur simultaneously?

5: Are there any grammatical and / or semantic differences between the old and the new construction, in other words, is it legitimate to treat them as equivalents?

1991-1997: The history of the genitive in Swedish. A Case study in degrammaticalization

PhD Project funded by the University of Amsterdam

After I graduated in Scandinavian Linguistics I worked on my PhD research at the Universities of Amsterdam and Uppsala, which resulted in my 1997 PhD thesis. Here’s the blurb:

“Degrammaticalization, the shift from a more grammatical to a less grammatical status, appears to be extremely rare. Yet a clear example of degrammaticalization is found in several contemporary Germanic languag­es, viz the s-genitive. The s-genitive (as in English the queen of England's power), is most suitably analysed as a phrase-final clitic, but unlike other clitics it does not derive from a lexical item, but from an inflectional ending.

This study presents a survey of the rise of the s-genitive in one language, namely Swedish. Covering a period of more than 700 years (from the beginning of the Runic Swedish period until the influential 1541 bible translation), it is concerned with both phonological, morphological and syntactic aspects of the Swedish genitive. From the historical data presented in this book, it becomes evident that ‑s, initially only the genitive singular of masculine and neuter (i/j)a-stems, was first re­analysed as a phrase marker before it spread to other declensions.

The book also provides a discussion of both internal and external factors that are usually held responsible for the loss of inflectional morphology in the continental Scandinavian languages, as well as a contrastive survey of possessive constructions in Germanic.”